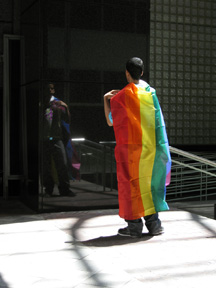 I was working with a new client recently on a suite of eLearning modules, and couldn’t help but note that the developer’s proposed stock images were virtually all Caucasian, and all young & good-looking model types.  I pointed out that of course this would not appropriately reflect the diversity of the audience, and the client readily agreed that some of the images in the suite needed to be changed out.  I also added another suggestion.  I’m gay, and as of this writing, I have yet to see a general-interest eLearning piece from any of my clients that includes gay and lesbian characters just as a matter of course.  I suggested that it would be a refreshing change to see a gay or lesbian character or couple incorporated in an upcoming module.

One subject matter expert on the project wrote back to say she wasn’t sure how one could tell if a character was gay or lesbian just by looking at him or her.  Of course.  So I wrote back to clarify: If using only an image, the character could be shown with his or her same-sex partner, raising a family together, participating in social activities while wearing a rainbow t-shirt or jewelry, whatever.  If you’re depicting a couple of families in a module, for example, why not make one a male/female couple, and the other a same sex couple?

Let me be clear: the point is not to make us stick out like sore thumbs with images that say “Wow, now that’s a gay person!  Aren’t we great for showing one?”  I am talking about using images that simply acknowledge our presence in the fabric of everyday life.  The fact that the character is gay or lesbian would not be the point of the elearning piece (unless perhaps it’s about diversity), but it’s just another color to show from the diversity rainbow.  And on a very practical level, it would be another welcome way to vary the characters in a series of eLearning pieces so that the characters don’t all just blend together and come across as cookie-cutter clones.  Now of course, a reference can be made in the script as well, as appropriate.  Good eLearning is always about the interplay of words and images.   It could be something as simple as “Anthony and Miguel were watching their son’s baseball game when Anthony looked at the old score board and got a great new product idea for his company….”   That’s all it would take to establish the relationship, even if it wasn’t referenced again in the entire module.  It would just be part of the fabric of the story.

On a practical level, this means that those images have to exist in the stock photo libraries from which most companies purchase their courseware images (Getty, iStockphoto, BigStock, et al.).  From what I’ve seen, while there are some LGBT images out there that would not look out of place in your average eLearning course, there’s not nearly enough yet, especially in the business sector images.  But let’s put that tactical reality aside for a moment.    I’m confident that the image banks would provide the content if enough clients ask for it.

I’d like to think that the time has come, and that corporations and their learning organizations are really ready to “walk the talk.”  It’s just that even with my larger corporate clients who have aggressive and sincere diversity strategies, I have not yet seen gay and lesbian characters included in the community of people depicted in day-to-day eLearning courseware.  But as eLearning professionals striving to hold a true mirror up to our audience, we have the power to introduce characters who happen to be gay or lesbian, and supplement that characterization with appropriate images.  Not just the power, really: the responsibility.  Again, the intent is simply to acknowledge that LGBT people and nontraditional couples and families have been there all along.  We should seize this opportunity to enrich the pool of characters with whom our audience might identify.  Isn’t it time?  Otherwise, aren’t we tacitly buying into the mindset of the sadly misguided (and thankfully now repealed) “Don’t Ask, Don’t Tell” policy?

My partner and I participate in the Gay Pride march in NYC as often as we can.  In 2009, while our group (Empire State Pride Agenda) was waiting to step off, I snapped the picture shown in this post: a candid shot of a young man draping a rainbow flag over his shoulders, “trying on his colors” in the reflection of a corporate building’s marble façade.  To me, it speaks volumes.   Shouldn’t he see himself in any eLearning he takes at your company?

What about you?  Does your company include gay and lesbian characters in eLearning as a matter of course?  If yes, how has that been received?  If not, has it been discussed?  If not, will you bring it up?  Of course, I understand that if one’s client is a religious institution, there may be constraints.  But for organizations who state that they do not discriminate on the basis of sexual orientation, I think it’s time to make this a reality, and I think it’s up to those of us in the learning profession to lead the way.  Let me hear from you!