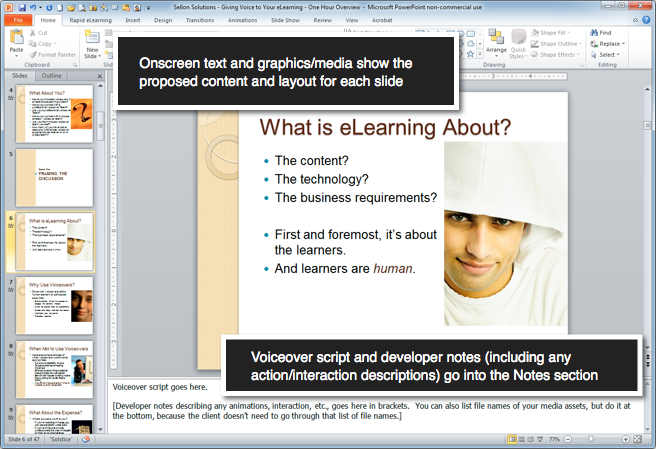 This week’s eLearning Heroes challenge (#48) on the Articulate Forum is all about the basics of Storyboarding. This is an essential topic, and one always worth revisiting! Here are the questions posed by moderator David Anderson of Articulate, and my answers:

How do you define scripting, storyboarding, and prototyping?

Scripting: I define “scripting” as the proposed wording of the voiceover script that will be used, slide by slide. Some people include the onscreen text in this definition. As long as you’re clear and consistent with your clients, so that everyone is on the same page, either can work. But coming from a performing arts background, for me the script is what is said.

Storyboarding: This is another term that comes from the performing arts, specifically the movies. Filmmakers typically have a visual shot-by-shot “storyboard” based on the written script, including visual mockups (even just stick figures) making it clear what the visual (and emotional) event is for each frame: an explosion, a look of surprise, a handshake, a close-up of an eye with a tear rolling down, etc. The storyboard is the blueprint for what the cinematographer and his or her camera crew will be looking to replicate faithfully on film. The same is true for eLearning: the storyboard represents slide by slide (or frame by frame) what the learner will encounter in the finished course–including onscreen text, visual/media elements, notation of any actions/interactions, and the voiceover script.

Prototyping: Even if you create a highly visual storyboard, it’s still only a static blueprint of what you (or your developer) will be building in your eLearning development tool. Before you develop a whole course, always develop a working prototype–a few sample slides (say 2-5) from your storyboard that give your client a “feel” for what the learning experience will be like hands-on for their target audience.  It should include draft onscreen text, image(s), and a sample interaction and/or quiz question that you plan to use. If time allows, and the client doesn’t know your work, scratch audio can be helpful, too. But for a quick prototype, it’s mainly about the look and feel.

Which method do you prefer?

I view these three elements as complimentary components of a whole, so to me it’s not an either/or situation. I use them all, and recommend that you do the same.

Do you use different types of storyboards? When do you use each?

I try to keep my process as simple and client-friendly as possible, so I use the template that best suits the project.

For soft skills training (ex: compliance, orientation, policy, etc.) I typically use PowerPoint, because every client is comfortable with it. I put the text and images on the slide, with an appropriate marker for any proposed interactive element. In the Notes section, I put the voiceover script for that slide, and in a separate bracketed paragraph, any developer notes–for instance, explanation of how an interaction will play out, how onscreen elements will appear or disappear, and align with the voiceover script. Clients can add their comments, and then once we have finalized the storyboard document, I strip out the bracketed developer notes. An alternative I sometimes use if time is tight: I storyboard right in my developer tool, then use the Word export to create a very basic storyboard document that the client can mark up. The drawback to this approach currently is that while the client can mark up the voiceover script, they cannot edit the text on the slide in the Word document, because it’s just a static image.

For simulations, I have created a separate (but still simple) MSWord template with columns for Audio File Name, Process Step #, Voiceover script, Action, and Comments. This serves as my “shooting script” when I capture the step-by-step screens needed for the simulation, and ensures that I’m not missing a step or interaction. Since there aren’t any visuals to use for a simulation storyboard until I record the screen captures, I will typically capture just one screen and mark it up with sample text, highlights, arrow, etc. as a style guide, so that the client understands what the look and feel of the whole simulation will be before I do the full set of captures. I’m including a screenshot sample of both kinds of storyboard templates with this post.  Tip: I always record my audio separately, in a standalone audio tool (Audacity, Audition, etc.) rather than in the developer tool. 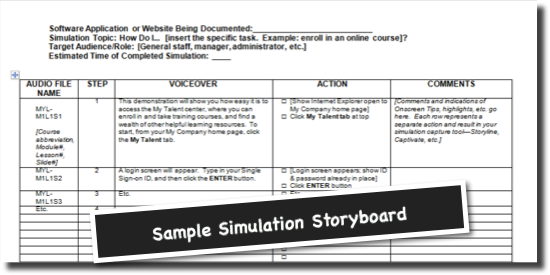 How do you storyboard interactivity?

When I have a slide with an interaction, I will typically draft the basic proposed interaction in my developer tool (for example, Articulate Storyline), and then I will do one of two things: (a) paste static screenshots onto slides in my storyboard, or (b) create an Mp4 clip of the full interaction, so that they can understand and evaluate the look and feel of the interaction. I use SnagIt for the Mp4 mini-movies, as Storyline currently doesn’t output to Mp4–something that hope will be in the next version! As I noted above, I typically include one sample interaction in my prototype, so that the client can interact with it hands-on and decide if that approach suits their target audience. Once the client is happy with the overall proposed look and feel of how interactions will be presented in the course, then a single screenshot of the interaction, along with a description in the Notes section, will usually suffice after that.

What are your top three storyboard tips for new course creators?

Thanks for another terrific challenge, David!  Now, I’m going to pose a challenge to Articulate in return. I have submitted this as a feature request, and think it would be enormously helpful to all Articulate Storyline users and their clients: Add a Developer Notes tab to the development stage (the content on this tab would never output in the published course), and adapt your Word export feature so that it outputs both the Notes (voiceover script) and any Developer Notes in their own cells below the slide image.  Finding a way to make the output images editable in the Word document would be a real bonus, too! Then the Word export feature would become an even better storyboarding tool, saving a lot of people time and money.

Folks: If you find my thoughts on this topic useful, I encourage you to leave a comment on this post.  And consider subscribing to my newsletter using the form on the right side of this site.  It’s free. It’s quarterly.  And there’s no spamming involved.  Ever.

Check Out My eLearning Portfolio Right Here On My Web Site!