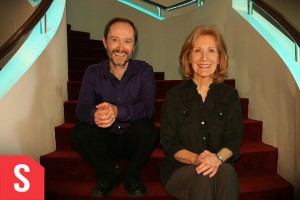 It was so exciting having family members at “The Grapes of Wrath” last night! Tonight more family and friends arrive, and they all see “Philadelphia, Here I Come!” tonight, then “Vanya and Sonia” tomorrow, and the new arrivals will see “Grapes” on Sunday. I’m so grateful for the ongoing love and support, both in person and online. Here’s a “Grapes” interview I did recently. I wish more of you could see this fantastic season of shows here!

Vanya and Sonia and Masha and Spike Opens Tonight at Asolo Rep!

I am beyond thrilled to be playing Vanya with this director, cast, and theatre.  And judging by the audience responses to our preview performances, the audiences are going to love this production.  This play has all the offbeat, wacky humor you’d expect from Chris Durang, but it also has an undercurrent of deep feeling that is taking us all on an amazing journey.  And for anyone who grew up during the 1950’s in the U.S., the play will have an especially strong resonance.

I have been advised that this production is expected to sell out its entire run; if you’re in the area and planning on coming, please do buy your tickets soon!  You won’t want to miss a couple of hours in the company of this zany and lovely cast of characters.  You will leave feeling very good, indeed.